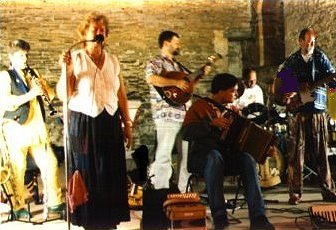 We are a six piece band including our own caller & if a good, fun dance, with clear, concise instructions is what you want, then we are the band for you!

We have been together for a many years now, with very few changes of band members.

In that time we have evolved our own repertoire, which maintains the emphasis on English dances & tunes, but also includes French & Eastern European influenced tunes & dances, (plus just a touch of style borrowed from the world of Jazz).